What Bodybuilding Has Taught Me

It is around this time of year every year that I become fascinated with what is going on in the world of professional bodybuilding as Mr Olympia is going down this weekend in Vegas.

As a kid, bodybuilding was the first taste of the iron that I had seen as my 90s childhood. Like many others it consisted of watching Arnold movies and Monday Night Wrestling. The end goal of possessing one of these superhero physiques is what eventually drove me into the gym when I was finally of age to do so. At the time the answer to every high school problem from being better on the football field to winning over the ladies was to get in the gym and get jacked.

After a couple of years in the gym a lot had changed as I believe it was a big component of my life that re invented my confidence in myself both physically and emotionally. However, at the same time I felt like I wanted more and wanted to train for a higher purpose and not just train for Friday night.

Where I grew up there was a small group of bodybuilders who would get ready for a provincial competition every year and I decided that this was going to be something that I wanted to take on. It became a pursuit, but more importantly it became my first formal training modality and I became fixated on it as reading and researching hypertrophy training and contest preparation overtook my last semester of university.

Getting ready to compete was one of the most difficult tasks that I had ever taken on. Unfortunately this is the part of the process that few get the opportunity to see but it consumed me.  Training was not an option as it had to be done, nutrition felt like a full time job and this was no gourmet cooking, and if you ask anyone what the final two weeks leading up to the big day felt like you will be entertained by the answer. The most difficult thing for me was the social component of the whole thing as the agenda I had at age twenty one was a lot different from the one that my friends had.

It was all worth it as there was no better feeling than getting through it all and showcasing it. I was able to get through it twice and I think that was enough. My own training as well as my training style has branched out beyond strictly physique training. However I do get to train a handful of figure competitors who are some of the most driven people I have ever encountered. Most importantly it was this time in and outside of the gym that ignited my passion for fitness and propelled me to act on it. 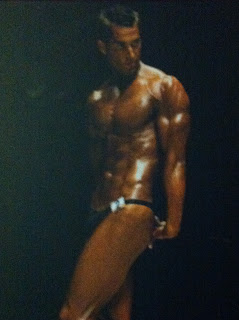 The modality of bodybuilding has taken a lot of heat over the past number of years and I cant argue with the heat as I believe that it does get misrepresented just like some of the other modalities that have followed it. However, I have also learned that it is far more effective to learn and implement the positives of a concept rather than sit back and rip the negatives. Bodybuilding has taught me a lot of positives when it comes to lifting, training, and most importantly getting things done. Although it is no longer at the forefront of my way of thinking I can say that it is certainly something that I do appreciate so in honor of the biggest event in bodybuilding I thought I would share what I have learned from the sport.

The Evolution Of Adherence

My athletic background was in team sports so accountability was never an issue. This was a major transition as this is a one man show when it comes to holding yourself accountable. It certainly provided its challenges but the one cool thing that I can say about this experienceas going through with my intentions. As easy as it is to say that you are going to do something, getting it done is what matters. Just like starting any major project the early stages are always a test as it is easy to become distracted. Then it is as if something just clicks and you are dialed into the task. The thought process of the outcome gets pushed aside and your attention gets redirected toward getting down to business. Soon enough what started out as thoughts, actions, and habits evolves into a belief in getting it done. Bodybuilding gave me my first true taste of this and I am grateful for it because it is a thought process that has definitely carried over into my professional life.

A simple concept that I had learned from an old Bob Cicherillo video to build a set of guns. Nothing scientific but to hit the inside of the bicep use an outside barbell grip and to build the outside of the bicep use an inside grip. I had no idea how valuable that concept was for me when it came to training people. Bicep curls are by no means a staple of my training but being able to roll with Bob's concept when it comes to hand and foot positioning to create a desired training response within any population has been an indispensable part of my own training as well as my programming. Maybe these guys aren't so dumb afterall.

Posing. The Yoga Of The Iron Game?

Arguably the component of bodybuilding that I had taken for granted the most. Of course when I talk about posing I am not alluding to the cats flaring their traps in front of the mirror at the health club. Remember the misrepresentations that I was mentioning? When talking posing there is a certain criteria of mandatory poses to go through in a competition that are meant to bring the best out of your physique. This is something that is absolutely essential for a physique athlete to polish in order to progress with their craft. What can also be said about it is that it is exhausting both physically and neurologically. It is also a unique art that consists joint mobility, kinetic awareness, muscle activation, energy system testing in a low impact environment. With all of this happening it is also requires an ability to make it look effortless and fluid. Sounds like a solid workout to me. If you are looking for a day of active recovery or even something comparable to a yoga like experience that requires the body in flow without contorting yourself in a hot studio then I would say strinking a pose may be your answer. Kai Greene is one of my faorite bodybuilders and his ability to master the art of posing tells us that maybe some of these guys are a little more functional than we've recently given them credit for.

A simple four syllable word to describe making muscle. However the methods of making muscle have taken this single word to a whole new level based on the concepts derived from it. Bodybuilders have always been at the forefront for it and we can thank the bodybuilding community for a lot of it. A lot of the leading experts in strength and hypertrophy training have derived their methods from learning from traditional bodybuilding methods. Not so much on what machines to hit, but the ability to understand altering joint angles, volume, time under tension, velocity, rest intervals, and training load in order to make the most of making muscle. Not everyone is going to be a bodybuilder but it is safe to say that anyone can benefit from adding muscle. Athletic performance, body composition, strength, body awareness, and tissue quality can all be enhanced by integrating varying levels of hypertrophy training. Not to mention, who doesn't want to look like a rockstar naked.

It is something that takes its criticism and there are some ugly sides of the sport of you choose to let it happen. But what I can say about the people within the physique community that I have gotten to know is that they are driven. They are some of the most dedicated people that I have ever encountered. I don't believe that looking at a physique athlete status is a great measure of accountability as I believe it is more important to get from point A to point B before you choose to climb higher in the goal based alphabet. However, if you get a chance to understand how it all started with these people they will be the first to tell you that it is a process. This journey doesn't happen over night. I have had the chance to experience this first hand and it has taught me a lot about embracing the small steps, having patience, and creating a culture of exercise vs. forcing an outcome of it.

More importantly it was an indispensable lesson in getting off of my ass and going something with myself at an age where it can be very easy to veer off in the other direction. To go beyond that, I believe that it was this experience that evolved my frame of mind from doing something with myself to putting the work toward making something of myself. The idea that success and luck are bi products of sweat not just in the gym, but in all facets of my professional and personal life and for that I am grateful.