Call it the maturation process of a man in his mid to late twenties or one too many on the fly Tupperware meals over the years but I've taken a liking to cooking these days.

Not your meal cooked to a safe consumtion standard either. I'm talking the type of meal that requires planning, time, effort, and tunes.

The type of cooking where your time and effort justifies the consumption of copious amounts of the final product. Gourmet means good for you does it not??

Just as enjoyable as the over consumption however is the process. The ability to plan, to prepare, to problem solve and to put it all together. To apply yourself mentally in a process where there is no pressure and nobody else to please other than yourself and the great people around you. A great escape if you will.

On top of that it is something that you strive to improve. The notion that you just put something great together and you're already thinking about how you would improve on it. The idea that you begin to seek out new challenges and new mediums to make the most of this labor of love.

My appreciation for Bourdain began after stumbling on his Travel Channel show No Reservations and then reading some of his interviews to eventually reading his books. The result being one of the most unexpected proclamations of my existence.

My favorite program is a cooking show. Well, sort of. 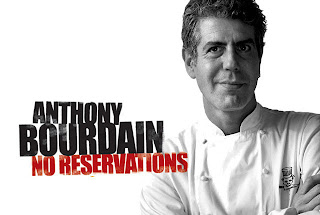 What can you learn about training from a man who has survived the rock n roll underbelly of being a celebrity chef to take his act around the world you ask?

Well in a profession where the literal of significance of training and food as a whole are made loud and clear in limitless articles, blog posts, and just about every second picture that pops up on my Facebook News Feed.

I have elected to throw my hat in the ring on the figurative and tell you what we can learn from this man's love of food and travel in order to get things cooking in your success kitchen.

No reservations in this show means picking a destination and just showing up. For that reason it can either go very well or it can be something very undesirable.

Take that notion and roll with it when it comes to training.

We're in a fitness culture where we are fed marketing, quotes, and Facebook posts which tend to highlight a no excuses, no pain no gain, and no stopping you.

The message of no reservations providing a sobering reminder that if your training decision making is strongly influenced by these notions you best be adding no guarantees to that list.

Which is not always a bad thing because whether the outcome be good or not what you expected you are going to learn from it. You will know what needs to be adjusted moving forward and you will be better because of it. And eventually...

You Begin To Find Paradise

There comes a point where your thoughts as well as your execution becomes tried and tested and within all of the static that comes with finding answers in training the signal begins to appear. Things just start to make sense and while there is still plenty of uncertainty moving forward you have an element of training that just makes sense.

Although there may be changes within that place as there should be, you begin to know where you belong and that is a very good thing.

Catch any work of his in Vietnam and I think you'll understand.

''Maybe that's enlightenment enough, to know that there is no resting place of the mind, no moment of smug clarity'' -Anthony Bourdain

For not just what gets consumed but for what gets absorbed

I've been very lucky to have some great meals in some great cities with some very great people over the years and can say that the intellectual indulgence is equally comparable to great food.

The opportunity to sit around with like minded people to talk shop and talk life has become an addiction for me.

I am uncertain of what exactly it is that puts someone above the rest but if I had to narrow it down to one definitive answer I would have to say that if you really want to be a great fitness pro, I highly suggest you have dinner with great fitness pros. End of story.

To watch Bourdain is to understand that the man has been just about everywhere.

While on the surface the accumulation of that many sensory experiences would signify seeing it all and knowing it all, you get inside the man's head and see a true testament of learning more is knowing less.

A notion in my eyes that is just as vital in training as exercise itself.

As for me, it is currently a birthday Saturday morning in beautiful Seattle to take it in. Another great year down and what I am hoping is many more of seeing, learning, and doing what I love to do.