I had the good fortune of growing up in a family of music. My father plays professionally, my sister is quite musically inclined, and I have an extended family rich with musical talent. As for me? Well I didn't quite cut it as my love for training has become my own expression of art.

However I can say with confidence that music has always been and always will be a big part of me as it is still something that I greatly appreciate, analyze and draw a lot of inspiration from.

As a result of this inspiration I have come across a lot of comparison. Comparisons between the elite both in training as well as in music. After years of listening to records, attending concerts, and hiding away in dusty blues joints I have realized that the path to greatness in both really isn't all that different.

In fact as trainers, we really do have a lot to learn from our iconic rock' n rollers when it comes to putting on a performance that leaves a lasting impression. Performances that create raving fans, performances that get raving fans talking, and ultimately performing your way to your desired outcome in the training profession.

Good rockers know their content. They know their tracks and know it well enough that if anything has to change they have the solution and things will go on as if nothing happened.

This allows you to get things done and get them done well due not only to the collaborative nature but because it makes communication much easier when you are not panicking for an alternative when it isn't on your clipboard.

Open Up To Your Audience

You catch a great musical act and more often than not they are great story tellers. Every track has a story and great rockers have a knack for opening up and sharing their stories to their audience.

Why not the same in a training environment? If there is anything that a client can appreciate is the idea that there is validity and reason behind what they are doing in the gym. Downtime within a workout provides you with the opportunity to provide that. Providing explanation behind your exercise selection, explaining where it came from and why you like it gives you ample opportunity to share your own experiences within your craft and on top of that validate what it is that you are prescribing.

The fantasy behind a rockstar lifestyle tells us that their day consists of playing a gig and that's that. Any dedicated rockers will tell you otherwise as it goes much deeper than money and fame. For the best of the best the work never stops. Behind every great rock production is a constant analysis of performance, practices, rehearsals, appearances, and on top of it all being relentless in writing, creating, and producing music. In other words, the job is never done and behind their success is work, sweat, and drive that does not always get showcased.

Training is extremely similar in my eyes as the whole story never gets showcased. Much like our rocking amigos the behind the scenes work is relentless. Training success is a result of constantly analyzing your performance, polishing your craft, building your business, putting in hours, reading, writing, and doing whatever it takes to evolve your knowledge and skill set.

If you want to train, make sure it is something that you love because the fantasy of being paid well to hang out in the gym is very quickly overshadowed by the reality of the endless workload that is required behind the scenes.

A good encore always sticks with me and is often a big conversation piece for me when it comes to talking about a good concert. It is always something that I appreciate because this is the time when a band is off the clock. Their job is done and the only currency backing an encore performance is applause and appreciation. When a band delivers an encore that blows the roof off the place it is talked about.

What can be said about that in training is if you have people who appreciate what you are doing I suggest you reward it in a similar fashion. Whether it is a complimentary session, articles, books, or information it is all good. To exceed expectation and add value on top of that solidifies the statement that you are for real and as a result your fan base will continue to grow.

Go To Your Place

Everyone digs a good face melter. If you are unfamiliar with a face melter refer to the image below. 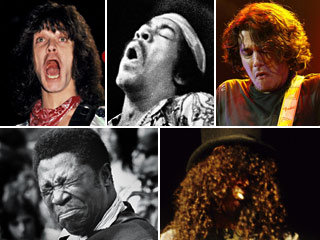 The face melter is often the horrific facial expression associated with beautiful sound. As ugly as they look, they don't care because there is nothing else running through their head other than producing the best sound possible.

While I am highly against adopting these facial expressions in a training environment I am highly for adopting the concept behind them. While you are training you are on stage and you need to find that place where there is nothing else going on other than the task at hand. You talk to a great musician or trainer they will tell you that when it is time to get it done it's all business. Nothing else.
Mentally they go to a place where anything that may be pressing them down is all irrelevant and all that matters is getting the job done and getting it done well.

For that reason I believe that treating a session like a guitar solo is vital. To train with your attention completely undivided is one of the best things that you can do for the development of both craft and client.

The Rolling Stones had Muddy Waters. The Black Keys had Junior Kimbrough. I was shocked after watching his documentary but Lemmy had Little Richard.

Great music is a result of creativity fuelled by inspirations and training is no different.

Recognition in training is a result of finding your own individuality and rolling with it. To get to this point is to learn and appreciate the principles of intelligent people. Seek inspiration from your favorite experts, read their content, get out and listen to them speak and make it your own. On top of that be like great bands and seek out multiple sources. It is nice to have multiple unbiased principles to follow because it allows you to filter everything through you own critical thinking process rather than just hearing the ''right'' answers. 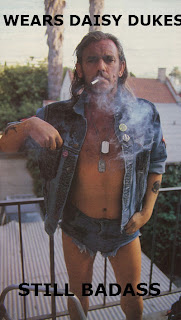 Do It Because You Dig It

Whether its rock or training it is a path of insecurity. There are days where you are on top of things and there are days where things just aren't flowing. When it comes down to it I train because I love to train. There are pleny of rockers who have enough cash and legacy to live a comfortable life but they keep going because that is what they are hard wired to do.

The creativity, the self improvement, the idea that your craft improves and changes lives is something that will always overshadow the extrinsic benefits tied to success. It's what keeps rockers rocking, trainers training and what ultimately defines where you take it.