Acting On Those Defining Moments

You ever have those moments in your life where something occurs that completely shifts the way you think and act? It could be a number of things. It could be anything that sparks it whether it be an experience, a relationship, or even an obscure ah ha! moment that just comes out of nowhere. I wanted to share a story of my own profound defining moment. I had just left home to begin pursuing a training opportunity in Calgary. This was an interesting time for me as it was a period of insecurity associated with a new gym, a new city, and the first time away from my family.

One of my first clients was a gentleman named John. He had come to me because he was looking to make some lifestyle changes in order to drop a little bit of weight as well as reduce his blood pressure. As I began training John, I realized that his agenda was far different from mine. While my effort was putting John through a well thought out workout, this effort was often sidetracked by addressing and chatting with just about every single person on the gym floor that he had gotten to know. We would work out, but our sessions often turned into a lot of laughing, joke and story telling in between some often extended intervals of rest. While this worried me at the beginning, it opened my eyes to something that often gets overlooked as a somewhat green trainer. Communication and relationship building are BIG dark horses in a fitness program. John became the definition of consistency, he lost weight, and his blood pressure was completely under control. At the time I didn't realize it,but it had everything to do with the environment he had created for himself in the gym.

In the summer of 2008 he came to me with some bad news. He had been diagnosed with colorectal cancer that required surgery as well as treatment. The outlook was not looking good at all as the surgery was a major concern because of his age. A few weeks had passed and John had sent me an email to get caught up as I had been out of town and he was recovering. Cue the defining moment. He wanted to let me know that he had been recovering well and his surgeon wanted to let me know that had he had not been in the condition that he was in, he may not have made it through the surgery.To this day I remember reading that email as it had knocked me back. I always loved exercise and at the time I had just begun finding my own in the gym. However, it was this email that had made me realize that this is what I am meant to be doing.

John didn't stop there. Shortly after, he was back in the gym going through some light workouts. He started back up with me and while there were days where the chemotherapy would set him back, he knew that exercise had him feeling better when it was all said and done. He then decided that he wanted to spread that message. He decided to film a DVD meant to help cancer survivors introduce exercise into their recovery. He decided to present it to the Tom Baker Cancer Center here in Calgary. Shortly after, he was treated and back to normal workouts which consisted of a lot of conversation, laughs, and of course a bit of exercise in all of that. 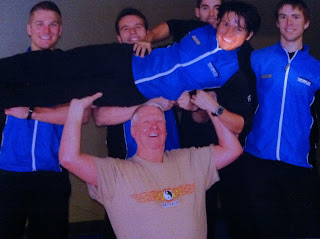 John eventually lost his battle with colorectal cancer this past June however the time that I had spent with him still brings a smile to my face as well as the people who had gotten to know him. This is a shot from 2009 of John and some great friends and colleagues of mine who could say the same.

John was able to teach me a lot about my profession as he made me realize the importance of the art of what I do. He taught me that professionalism, communication, relationships, and of course a bit of fun in the gym can be as big of an asset as a perfectly designed program. More importantly, his story clued me into the magnitude of change that can be experienced through exercise. His story is a constant reminder to me of why I do what I do and why I wouldn't change it for the world.