July is behind us and personally what an action packed month it has been. From capitalising on the Wild West speed laws in Montana to collaborating with three other presenters who have rocked my world over the years to be a part of an incredible first annual Edmonton Performance Summit. Wrapping up the month by catching up with some great fitness friends that I have at the Okanagan Strength and Conditioning Conference and being able to hash it out with two good friends Sean Guevremont and Steve Saville. Both being coaches and absolutely brilliant at what they do it made for some especially memorable shop talking.

Not to discount the unbelievable time that I had throughout the month of July but there was one event in particular that rounded out July 2013 and well..... for me this one was a doozy.

The whole thing started with a story from a long time client. The type of story that as a personal trainer makes you wonder whether the title of personal trainer really validates what training has the potential to do.

The type of story that has taken a lot of my thoughts on the fitness industry as a whole and flipped them on their head and ultimately a story that I felt like I needed to share. I just didn't expect to be sharing it at something of this magnitude.

So when I was chosen to express my two cents on how we need to think as trainers at the NSCA National Conference my reaction was essentially a seated version of, well....

There is a special sense of nostalgia that I have with this event as it was back in 2009 that I had decided to attend this conference for the first time as well as take a kick at the can for my CSCS certification.

It was my first real taste of continuing education where I was able to hit the road and take in an education where I was completely starstruck by impact that the coaches, trainers, researchers, and practitioners presenting were making in the industry. They were and in my eyes still are some of the best on the planet.

It was also an opportunity for me to take in Las Vegas, a city that I have grown to love for a number of reasons.

The most profound being the vivid memory of silently staring over the strip post conference with a rooftop vantage point and a Boris Yeltsin BAC realizing that I truly found what I wanted to do and do well.

Just like back in '09 the conference was held in the beautiful and very well situated Paris Las Vegas. Another piece of nostalgia added to the puzzle. 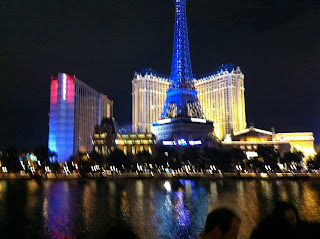 From what I remembered from four years back was that this conference was huge. Big attendance,
big exhibitor ballroom, and big conference rooms so naturally coming back to present at this thing I knew what I was getting myself into. It didn't matter. The room was huge and things went straight back to surreal but that certainly wasn't a bad thing. 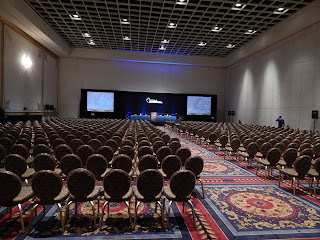 Despite the nerves I was pumped. This has been a presentation that has been stirring in my head since October and it was a topic that hit close to home for myself and was beyond excited to get it off my chest. Add to it being able to hang out for a day prior to it and shoot the breeze with some very cool attendees as well as speakers. Despite the different backgrounds, levels of experience, brains, or abilities every one of the 1700+ people involved were there for the same reason.

To get better at better. That put my mind at ease.

I was one of three presenters kicking off the first day and for my first time at something of this magnitude I was happy about that. The only catch being when you are dreaming about sleeping in for the biggest speaking engagement of your life a good old fashioned Vegas loan shark beating wasn't going to put me back in dreamland.

So after an impromptu influx of time to get ready things got started at 830am and despite the nerves leading up to it all there was something kind of peaceful about being up there.

Not quite sure what I remember from the presentation itself as it was all kind of a blur but to give you the Coles Notes it would be comparable to the following statement.

Great personal trainers have outgrown the title personal trainer due to their understanding that there is so much more to it than that. I am uncertain of what the title of what these trainers do nor do I have an idea of what it should be but if you are a trainer and all that you believe you are doing is exclusively training you are not giving yourself enough recognition nor are you establishing yourself to earn it.

Professionally this was a big feat for me as it was something that I had aspired to do at some point in my career just not this early in the game. On top of it to have other fitness pros approach me with some incredible questions and provide me with some incredible feedback when it was all said and done. It's a surreal feeling that I am still trying to process. Particularly 2012 NSCA CPT of the year Robert Linkul for the kind words. Means a lot amigo you made my day.

I also want to say a big thanks to U of C Baseball head coach/boss/partner in crime for the week Colin Moro for making the trip down as having some professional support certainly helped. Beyond excited to be back for another year and do what I can do to put this program on the map. 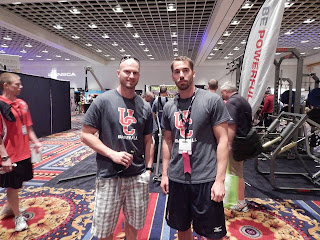 Turns out there was some ulterior motive behind this professional support and it goes by the name of Las Vegas.

Rubber arm twisted. After stirring on this presentation for a number of months and all of a sudden it's over I would be lying if I said I did not have celebration on my mind. So after chatting with some very cool folks in the exhibitor hall and taking in some world class presentations it was off to see what any fitness professional would see after a day of fitness education.

Sink a cocktail and take in the smooth sounds of a supersized Elvis impersonator.

Big Elvis has been a strip favourite of mine for a few years now and despite the fact he has a custom built throne and he doesn't exactly move around much I will say this. The guy is good.... very good.

No I should not find entertainment in this man's size but I will tell you that he has the shtick absolutely nailed, the chops to back it up, he is making people happy and he enjoys what he does. Who am I to judge? Add to it he used to be over a thousand so props to the guy for dropping three bills.

Next stop was Cashman Field to slug it out in the minor leagues with the 51's. 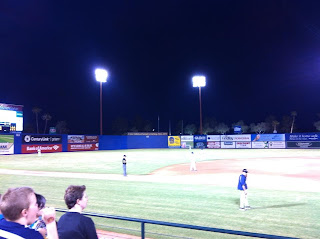 I've always been a fan of baseball but I can't say I ever took it anywhere as a player. To say that I know the very detailed intricacies of the game would be a stretch of the truth so I do enjoy getting out to them when I can.

Not to mention I am hard pressed to find any Americana that I enjoy more than just sitting back and taking in minor league baseball. Not sure why I love it as much as I do but I just do.

Dollar beer night helps. Put another on the scoreboard for the Americans on that one.

Lesson 1: You Can't Knock The Hustle

Personally this was a big task. As a hard wired quiet kid public speaking was always something that I dreaded and to this day I still get that feeling of panic for events as simple as raising my hand and asking a question. The past number of years I have had to challenge and overcome those hesitations and to be able to work toward something of this size and get it done was a huge personal accomplishment.

Professionally this was something even more special. I had this love for working out for as long as I can remember but I never expected it to evolve into what it has evolved into. Academically I was told that I did not have the high school transcript to get into any physical education degree programs.

I finished my degree with some other plans in mind but went straight back to pursuing a training certification by failing the exam the first time. Second time around was a pass but attached to that pass was the sobering message from the instructor that she would never hire me as a trainer. A pass is a pass.

Seven years after just squeaking through an entry level certification I never would have thought it would turn into the ride it has. Making a living doing something that has captured my interest since watching Body Shaping on ESPN before school when I was five. (Please tell me someone remembers this show)

It has been a great ride so far but its engine has been fueled by a lot of sweat and I see it no differently when it comes to moving forward.

Working with some incredible clients, hashing it out with some brilliant trainers from all over the globe, travelling, teaching and being a part of a young and very hungry baseball program.

Add too it presenting with the NSCA and it really has been an absolute blast now that I have had the chance to look back on it all.

Let me start by saying that. It has been good to me in the sense of fun, continuing education believe it or not, and there is just something about being in the desert that gets you thinking on another level whether Vegas or somewhere in the middle of the Mohave.

Vegas has evolved from a fantasyland to me and into a place where some of the most important components of reality are thrown at you at a profoundly accelerated pace. Elements like risk/reward, what hard work can provide you and how fast it can evaporate if you take it for granted, indulgence, romance, sleep deprivation, real and fake.

All of these can be found in Vegas and they are there to test you over a short time and the key questions being how well can you handle it and how can you do it better next time?

However you may interpret this city there is one very simple but profound lesson that Las Vegas allows me to remember every time I am there. A lesson that paved my own path back in '09. Whether reality is happening in real time or light speed and whether it is currently working in your favor or it is throwing a few jabs at you.

Sometimes you just have to sit back, stay silent, enjoy the view. Let magic happen. 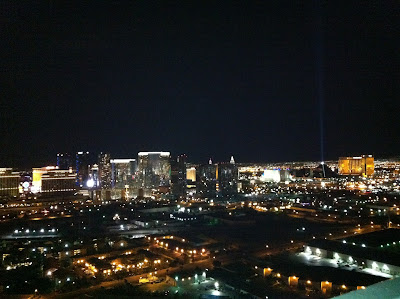 Thanks to the NSCA for the incredible opportunity and for the chance to be a part of such a world class event full of world class people. To my clients it is hard to say where I would be if I haven't encountered every single one of you so thank you so much for making me better and driving me to become better than better.

Ambition is a dream with a V8 engine
-Elvis Presley